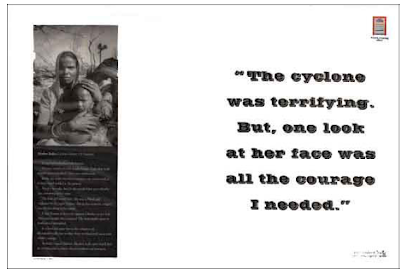 The headline for the advertisement that you see goes some thing like this, : “The cyclone was terrifying. But, one look at her face was all the courage I needed”. The body copy reads, Mother India: Cyclone Victim? Or Saviour?

It was heel unleashed from heaven. Monster winds tore into fragile houses. Exploding walls of tidal water smashed Orissa into smithereens. In the eye of this merciless savagery, one malnourished woman stood welded to the ground. Not for her sake, but for the terrified five year old who was screaming in her arms. The little girl wasn’t hers. She was a Hindu girl orphaned by the super cyclone. But at that moment, religion was the last thing on her mind It was Nature at its worst, against a Mother at her best. And sure enough, they survived. The indomitable spirit of motherhood triumphed.

In a land that give rise to this nameless yet photographically true mother, there are
thousands more with similar courage.

As India’s equal children, this then is the spirit that’ll find us storming into a future already resilient and resurgent.

Moving wasn’t it, well that can be the power of a good advertisement. Please understand that public service advertising is identified with national cause, even in the promotion of soap or insurance there could be elements of public service. There should be a thorough knowledge of the target market, especially if we are talking about adult education, AIDS, national calamity relief fund, birth control, etc. So keep the message short, dramatic and single minded. In fact it would be nice if you could think of an issue and create an advertisement on it.

Be the first to comment on "Public Services Advertising"