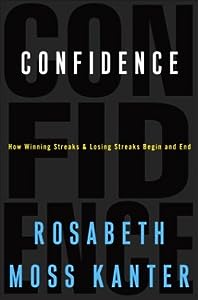 When business is looking for the secret of success, it should turn to sport
Rosabeth Kanter

For many years I have observed the ups and downs of organisations as well as countries and also life. During up-times it’s clear that confidence swells and people feel they can do anything, which motivates feats of high performance, because confidence is just an expectation of a positive outcome. When I have confidence, I believe that success is possible, and so those with confidence put in the effort to do the work. It’s really the work that produces success.

During downtimes, confidence ebbs. People, organisations and whole countries get depressed, defeatist and they stop trying. The task of leaders is to produce confidence, to motivate performance, and that requires an organisational culture with certain underpinnings and foundations in place that produce a culture of confidence not just for individuals but confidence in the team, confidence in the system and confidence by investors, stakeholders and the public that the organisation will deliver on its promises.

I have studied the difference between sustained success, or what I call “winning streaks”, just like in sports, and perpetual mediocrity or decline, or as I call them, “losing streaks”, again like sports. I have studied this in businesses such as Gillette, Siemens, Seagate Technology, General Electric, Continental Airlines, the BBC. I have studied this in community and government organisations and in whole countries. I have looked at this phenomenon in microcosm in sports teams, where we can draw many lessons that are applicable to business.

First, winning is a whole lot better than losing. Think about it a moment: it’s not just, of course, the obvious, that we all want success in our organisations and all of our endeavours, but it’s also that the very fact that winning, succeeding, produces better behaviour. It produces better behaviour that will help the team or the organisation perform better in the future.

First of all, people are in a better mood and when people are in a good mood they’re attracted to one another, they want to gather, they want to talk over the past performance. Therefore, they get all of the advantages of learning because they are comparing notes: on how did we win that big sale, how did we make the acquisition, how did we accomplish that incredible conference? When they do that, they have the advantage of learning, whereas losers slink off into the corner, don’t want to talk about it and, therefore, have no opportunity to learn. It only reinforces them in their depression.

Winning brings greater resources, investment by external people. It brings better press. Winning provides more opportunities to be part of better networks, to get better deals. Those who are seen as successful often get bigger discounts. They get sponsorship opportunities. They get first crack at the best people. They get invited to receptions or parties or events where they’re going to meet other people, gain business intelligence and, therefore, have an advantage for the next race.

A second lesson about the difference between sustained success and mediocrity or perpetual failure is that winning is boring. That is, winning can lull people into false complacency or overconfidence. Instead of building their confidence that they can go on to the next victory, they become arrogant and, therefore, stop trying, and that’s one of the reasons that winning streaks end or that success comes to an end.
Also, I say that winning is boring because it’s really hard work. It’s not a matter of doing things that are flashy or dramatic. It’s a matter of constant discipline and professionalism all of the time. It was interesting when I talked to some leaders of sports teams. In teams that had sustained high performance, very long winning streaks, including one team that had a record for the only undefeated season in its sport, when we asked the coach “How did you feel about that undefeated season?”, he said: “The interesting thing about that season was that there was nothing interesting about it. All the players did was get up every day, practise hard, then come to work and win games”. They practised all the time and they held themselves accountable for performance. Leaders have to model this.

A third lesson about the difference is that it’s not the talent; it’s the talent in the team. There’s an obsession in organisations today with talent, with individuals. But most people who meet the threshold of talent will either play above their game or below their game, depending on the culture that surrounds them. On winning teams it’s the team, not the talent. Losing teams and declining organisations often have stars but the stars are out for themselves. They’re looking at their own résumés. They’re trying to promote their own careers rather than promoting the team as a whole.

The fourth difference between sustained success and mediocrity is that winners think small as well as thinking big. Of course you want some big goals, but you also need a constant series of small wins in an organisation. You need many people in unexpected places developing ideas that you didn’t even know were there.

The BBC needed a bit of a turnaround in the early 2000s because in the late 1990s it had been losing audience share and there were concerns about its creativity. A new chief executive set in motion a system of brainstorming meetings and other ways to empower people. Under this new environment, a relatively new trainee was given a budget to create a training film for a new orientation programme. Part of the goal in that era was to create one BBC instead of a set of fragmented divisions: radio versus television news versus sport, and so on. So his job was to create a film that would tell people about life in the organisation. He took that budget and made a film that turned out to be the pilot for The Office, the BBC’s biggest hit comedy since John Cleese in Fawlty Towers. Unexpected, and a small win that turned into a big victory.

The fifth difference between winners and losers is that the secret of winning is how you handle losing. What organisations need most is resilience. Every person is subject to what I call Kanter’s law. Kanter’s law says that nearly everything, especially if it’s new and different, can look like a failure in the middle. If we stop, then by definition it’s a failure. If we have the confidence of winners and the culture of the organisation or our team behind us, we can often convert near-misses or near-disasters into opportunities for improvement, and that’s what winners do.

About the Author
–– Rosabeth Moss Kanter is the Ernest L. Arbuckle Professor of Business Administration at Harvard Business School
–– She specialises in strategy, innovation and leadership for change
–– She was Editor of the Harvard Business Review between 1989 and 1992
–– She has written and co-written 16 books, including Confidence: How Winning Streaks & Losing Streaks Begin & End; Men & Women of the Corporation and The Change Masters
–– She co-founded the consulting group Goodmeasure in 1977. It specialises in organisational change and innovation She received the Academy of Management’s Distinguished Career Award in 2001
–– She taught at Yale University and Brandeis University before joining Harvard Business School.

Be the first to comment on "Winning is not merely a desirable thing, it’s everything"