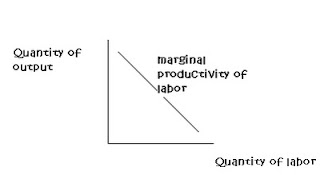 Professor John Palmer states that when we developed the Law of Diminishing marginal returns, we simplified our analysis by concentrating on just two inputs in the production process: labor and capital. There are tow ways of viewing the firm’s input use decision if we want to use some simple graphs. In the first approach, we consider the firm as hiring increasing amounts of labor while holding its amount of capital fixed. The graph below shows the diminishing marginal productivity of labor. As the labor force gets bigger and the stock of machines does not, each individual worker has a smaller quantity of machines to work with and less productivity.

According to Prof. Palmer, the area under a firm’s marginal productivity curve measures the total amount that the firm has produced. Suppose this firm has hired six units of labor and four units of capital. Then the total output of this firm is shown in the area under the curve in the graph above. If the firm keeps its machine stock constant but hired one more worker, its total output would increase. The marginal product curve is the firm’s demand curve for that factory. Thus, to find out whether a certain factor, say, labor, receives a high wage or a low wage, we must simply add together the marginal product curves for all the firms to get the overall demand curve for labor. Then, see where that demand curve intersects the overall supply curve for labor.
Roseman sates that some people like the so-called second earners in families, work more when wages are high. Others, like self-employed professionals, work less when wages are high. These positive and negative responses to higher wages appear to cancel out, since the overall supply of labor in completely inelastic.  According to Prof. Palmer, the graph below shows the overall demand curve for labor, and an inelastic supply curve for labor. Because these curves are for the whole economy, the total income available to all the citizens is the nation’s total product. Measured in physical units of output, then, society’s total income that is generated by the production process is the gray area in the graph. In output units, each laborer is receiving this equilibrium wage rate. The owners of scarce factors of production receive very high incomes, while the owners of abundant factors of production get very low incomes.
According to Prof. Palmer, we want scarce factors to carry very high prices, because if it costs firms a lot to use them, they will use such scarce items only where they are especially valuable. The efficiency we get from this system is what we want if the economy is to generate the most material welfare that is possible given our scarce resources. The way factors get paid in a market economy is efficient, but the outcome can be pretty discouraging on income distribution grounds for many individuals, especially if they own only a little bit of an abundant factor of production such as unskilled labor.
Roseman also states that we confront the trade-off between efficiency and equity. There are three possible ways to redistribute income among individuals. One option is to redefine the ownership of factors, for example, by taking land from the rich and giving it to the poor. A second option is to impose regulations on markets, such as a minimum wage law. Broadly speaking, economists prefer to focus on the third alternative: this involves leaving the ownership of factors as it is, and letting markets work so that flexible factor prices can ensure that resources are used efficiently.
SHARE TWEET PIN SHARE